Flooding in the Bormida Valley

26 Nov Flooding in the Bormida Valley


The monitoring network activated last spring by the Cairo Council has been controlling one of the most intense events in the last 20 years.

During Thursday 24th November 2016 the areas of the Imperia and Savona hinterlands as well as the Cuneo side of the Tanaro valley were hit by a devastating weather event. The persistence of intense rainfalls caused the overflowing of a number of streams over a vast area of eastern Liguria and southern Piedmont. The weather and hydrology network existing in the Cairo Montenotte area allowed a timely monitoring of the flooding. The council team of the agency for the environmental protection used the reading of the levels of the rain gauges located upstream Rio Lopa, Rio Ferrere and Rio Le Ville since the very late morning they started recording particularly high rain levels which occurred before small or important streams actually overflew over the whole area.

In a second stage it became vital to monitor the level and flow of the two arms of Bormida river (Pallare and Mallare) to be able to judge the overflowing over the whole areas of Carcare and the Cairo villages of Ferrania and Rocchetta Cairo. It was also important to be able to establish the inertial power of the flood spreading to the main axis of the Spigno Bormida. 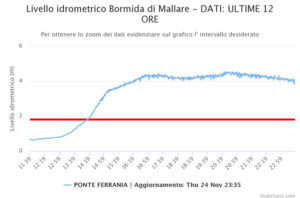 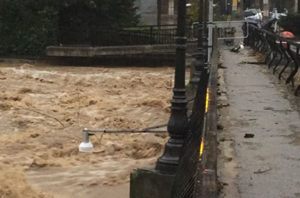